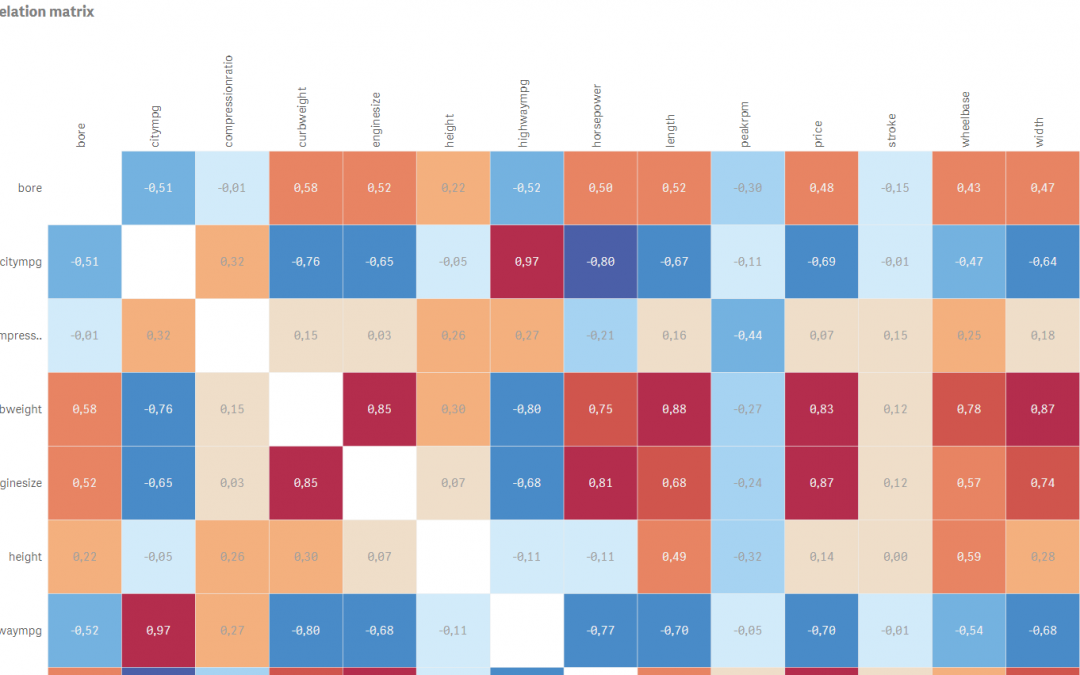 For some people one of the weaknesses of Qlik Sense are limited visualisations, but with a little effort and out-of-the-box thinking you can overcome the obstacles and make creative visualisations in Qlik Sense. Today we will make the interactive correlation matrix.

Download data from here. The data-set contains data from 1985 Ward’s Automotive Yearbook. First, we should rename the columns using aliases in Qlik Sense, since R does not like ‘-‘ in column names and it would replace them by ‘.’ which would create an unnecessary mess.

Now, we have to calculate correlations and corresponding P-Values using R. Do not hesitate to use the following script.

The R-script returns a compact table containing everything. I prefer to clean it up a little so that we end-up with a nice data model.

You should end up with a 2-table data model like this: 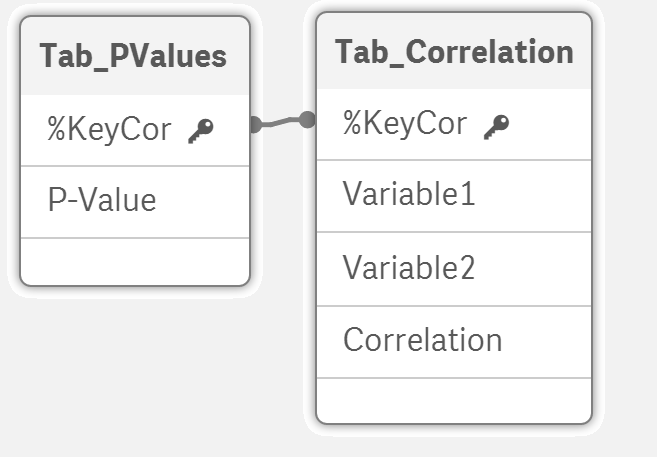 Good job! We are ready to set-up a visualisation on top of the data model we have. As the result we will have a correlation matrix showing actual Pearson’s correlation coefficient values together with colours (dark blue for negative correlations and red for positive ones). In addition to that we will also have a slider to select P-Value levels which will be shown. With this approach you can show and analyse only statistically significant correlations and also select any significance level.

Make the heatmap responsive to the significance level

The heatmap is all set but we still have to add some kind of input to assign values to the vSign variable. Let’s use slider for that.

Go to Custom objects > Qlik Dashboard bundle > Variable input. Change it to slider and assign vSign variable to this visualisation. Set Min to 0.01 and Max to 1. Step should be set to 0.01. All done, you have fully interactive correlation matrix with an option to select statistical significance level. Move the slider and observe how non-significant correlations disappear.

Let’s say you would like to model car price based on the other numeric variables. Click on the corresponding row and navigate using the slider to select correlations where P-Value is less than or equal to 0.05. You now have a good starting point for building your model using price as dependent variable and bore, citympg, curbweight, enginesize, highwaympg, length, wheelbase, width as explanatory variables.

If you are interested go ahead and check the last article from the Creative visualisations in Qlik Sense series about the Q-Q plot.